Atmedia 2005 wind-down: everything you’d want to know (or not)

Here’s my own summary of the first event of its kind in Europe. Web developers, accessibility specialists, gurus, you want it you name it.

The two-day atmedia 2005 event was, I hear, the first of its kind in Europe. That may explain why the audience was underestimated by the organisers, although the level of the talks went up a lot on the second day.

Most of them were by and large very interesting to listen to, even if the first day was more general and preaching to the converted. The attendance was mainly composed of experts either in code or in accessibility —or both.

Jeffrey Zeldman’s speech was elegantly delivered, this guy knows how to handle an audience. This is where my groupie factor grew tenfold, I’m afraid. He gave us the obvious about the WaSP, but also a few behind-the-scenes details that helped us understand the big picture as a whole, especially the part of how interaction with browser vendors turned from aggressive to collaborative (point confirmed and refined by Molly Holzschlag the next day).

I was not convinced by Douglas Bowman on the first day, though. His speech was about how fascinating CSS are and how happy he is to use them as a great tool for web design... but his enthusiasm didn’t show through. Jet-lag, I suppose. On the contrary, the next day he gave us a hands-on, detailed account of some of his methods, and boy, when he’s started it’s a real pleasure.

To sum up briefly, the first day was a small disappointment, like other people have already noted. Talks were too general, so a few of us felt like we could have done as well. This does not diminish the talent and quality of the speakers, this just means that the level of the attendance was generally higher than expected. There were no managers in the audience, no people to convince, no beginners: we were all (or most of us) well-versed in standards and accessibility, as was noted by Andy Budd humourously.

The second day was a different thing entirely: much food for thought was taken back home.

Douglas Bowman’s hands-on story (and some behind-the-scences information) about some of his methods was more interesting than when you read it. Concise, down-to-earth tips and tricks, live comp-to-end-product explanations were a must-see. You obviously can’t put as much information in an online article, even when it’s clever and extensive as Doug’s articles are, as you can in a live conference. That’s what conferences are for, aren’t they?

Joe Clark’s speech about big-font display felt the same: although one has read about it earlier, it’s much better when it’s live. I went back home wondering how we can help Joe in his live experience of providing several style sheets on a given site. This echoes Chris’s article Learning to let go, and although I’m always pointing out that people with a low vision know how to change settings on their computer, which is why I never completely agreed with Chris on this, Joe managed to persuade me that users aren’t generally as savvy as I thought. Duly noted for future tweaks here, stay tuned [1].

Molly Holzschlag’s speech was very interesting, although being part of large projects, I knew most of the basics of project management workflows. The new trick I learnt was wireframing CSS. This one won’t be forgotten. The point’s aim is twofold: first, it’s a f**ing good reason to write standard code, because the development process is simplified (compare it with table-based layout and cry). Second, it shows how easy, through CSS, you can separate the site’s general look (this has to do with branding and ’user experience’ through color, fonts, etc) and the site’s general interface: wireframes are plain grey-shade CSS files, which help you discuss with the client which piece of information should go where. Client wants this there and not here? Two lines in the CSS file, and bam, you can test the new page’s layout live in no time. As a matter of fact, my site’s new design is not yet finished in Photoshop, although the main CSS layout is already done, so I really felt concerned by Molly’s speech. Oh, and she’s quite a show in herself, by the way.

I positively loved Andy Clarke’s presentation. Will I say anything about his being a Mod? OK, I will. Andy Clarke has got to be one of the finest british speakers around. His Mod look is er... different from us all geekish, baggy-pants, t-shirt-over-pants types. And he’s got this inimitable English flair, together with a wonderful tongue-in-cheek humour. Not many people can say ’shite’ and walk away with it without offending anybody, can they? His real-life experience was very finely blogged about by Joe Clark, so I won’t repeat it here, but his point is oh-so very true: clients don’t give a monkey’s (faithful quotation) about standards and accessibility, they’re more into brand coherence, marketing for the masses, sales growth, etc.

I won’t sum up every speech (see Joe Clark’s blog, among others, for a better job than I would do), but all in all it was a pleasure to listen to all that was said, either because I learnt new bits here and there or because it confirmed that I was doing the right thing (my job is closer to that of Derek Featherstone at the moment, for those who would wonder).

I arrived on Wednesday evening, and as soon as my rucksack was thrown onto my room’s carpet, I was outside going for a beer in the pub with three long-time evolters, Mike King, John Handelaar and Seb Potter. A great moment, although I had trouble getting my understanding of english into full gear (pubs are noisy and I really lack practise). We ended up being the last customers in the pub, which says a lot about how nice it was.

Thursday was my groupie day: I could clap like mad at Zeldman, met Douglas Bowman in the men’s room. Oh, here’s a (not so) funny one: we were all waiting in line and someone said "Now we know how girls feel" (because, as you know, at recessgirls often end up queuing in loos), and I was in such a geeky mood, so I went "Actually I feel more like an <li> in a <ul>". Puzzled looks stared back at me, as if wondering which planet I came from. So much for my seriousness.

Then at noon I had the occasion of shaking hands with Peter-Paul Koch, who is definitely a really nice guy. Did I tell you that the first ever piece of Javascript I used came from his tutorials, back in 1997 or 1998?

At the atmedia party I had the occasion of meeting Joe Clark and apologising about the delay for my translation into French of Big, Stark and Chunky — I’m very, very late: it was due between February and April. I don’t know if "I’m lazy" is such a good apology, though. Shame on me.

The next day I had the occasion of exchanging information with Jeremy Keith (who did a very nice, informative and lively speech, by the way) about generated content and screen readers, as Ajax for instance is a big problem: JAWS does not know that a part of the page has been rewritten if it’s done after the window.onload event.

Last but not least, I spent the two days with none other than Chris Heilmann. He’s the nicest person and we had a few good laughs; we of course talked a lot about the subject at hand. Chris even went so far as testing a script right during a speech, and let me tell you, I felt like a beginner when I saw how well he handles his HomeSite and how fast he codes! We had a walk around London after we left the atmedia party, and laughed a good deal. We became a little group of tourists together with a few german people whose pictures I’m expecting, where you’ll see how touristy we were (EDIT: here they are, thanks Marc!). 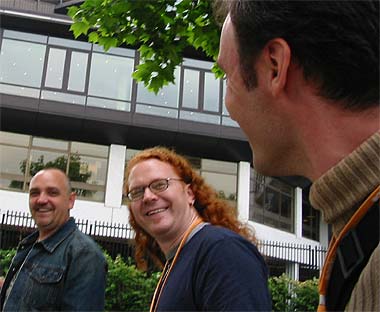 On the picture, left to right: Gez Lemon, Chris Heilmann, me.

All in all it was an incredible two days, and it felt much shorter than that. I’d wish it never stopped. High-level expertise blew my mind away, especially on the second day. Patrick Griffiths is a real pro when it comes to putting up such a big event, the venue was superb and the whole hostess-badge-bag-food organisation was impeccable (do you say impeccable in english?). So thanks a lot to Patrick, who, I’m sure, is already raising the stakes for next year. I’m already craving to go. Those two days flew by.

[1] I’m thinking of a way to know which CSS people use by writing a ’forking’ CSS file in PHP, and storing the results into a database, to be able to give real-world figures back to Joe about how many page views were done using ’tailor-made’ CSS or the site’s default one.